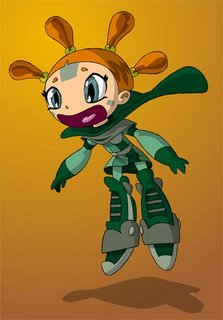 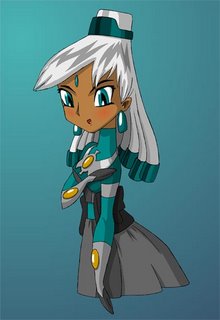 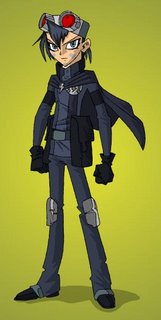 Here's some development I had done for Greg Collinson awhile back. His only direction was to have fun with it - I tried some anime inspired stuff, not the greatest but it was fun...even the Yu-gi-oh ripoff:)

Greg's a great guy to work for and super easy to get along with. He's a great talent, killer painter and he just so happens to have his very own series premiering this Saturday on Teletoon @ 5pm.

So anyone in Teletoon range check it out!!! The show looks wicked Greg - congrats!
Posted by Todd Kauffman at 10:53 PM 8 comments:

Big thanks to Andrew Scribner for a great job. This master will be in the "Shady Characters" show in NYC and the other is on it's way overseas to become the mold for our limited run production. 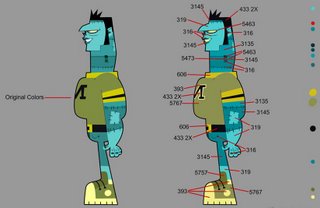 Before we started the next stage, paint - the colorist needed the PMS#s for CRUSH. I tried to match the original color scheme best I could. The new colors are a bit more intense but we're still happy with them.
Posted by Todd Kauffman at 10:19 AM 2 comments: 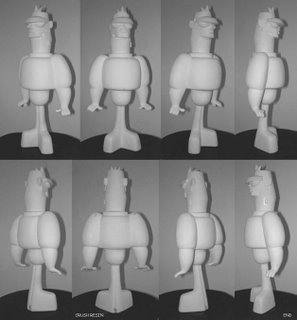 Here's the smooooothed out resin. NICE JOB ERIC!!! The sculpt will get cast in wax again overseas and all areas will get even tighter before they make the final steel mold.
Next stage - COLOR 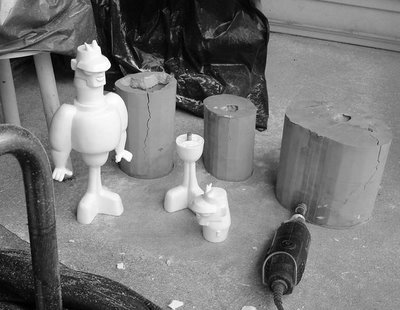 First shot of the resin out of the cast...SWEETNESS!!! One more body section then Eric will tool them to remove any imperfections.
Posted by Todd Kauffman at 4:36 PM 5 comments: 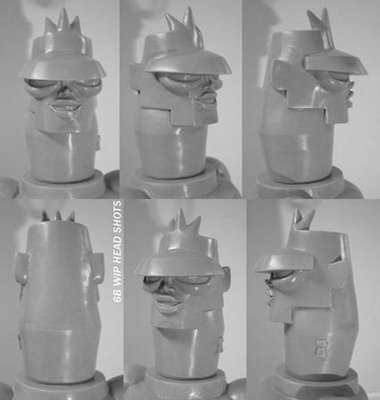 Stage 6B - here's an update on the head and face. Details are being refined - ears, zipper on neck, nostrils, etc. The head is pegged and swivels at the neck (for casting and molding purposes).
Next stage - molding and casting the resin. 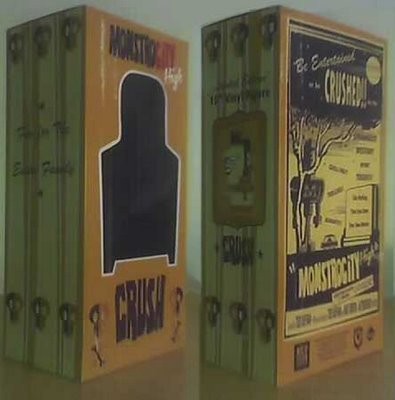 Well here it is.
With special thanks to our pal Brian Torrens, we now have a mock-up of the CRUSH box, complete with an acetate viewing window .
Brian and I go way back. I've known him since grade 5 or so and our paths seem to cross whenever the time is right. Brian worked with Todd and I once before: He painstakingly hand painted all of our miniature sets for our YTV series "The 9th Life of Sherman Phelps". He did an awesome job then and his help with the box is greatly appreciated.
Thanks Brian!
The box is now on its way to NYC for the Live With Animals Show to meet up with its counterpart -- the CRUSH vinyl.
Posted by Thorny at 2:55 PM 2 comments: 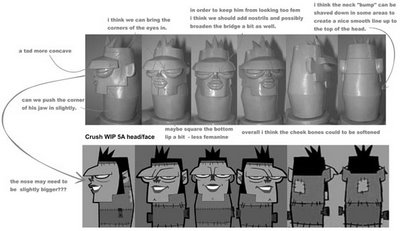 Stage 5A - Crush's head. My 2D drawing had tons of cheats in it and we had to make a few compromises because not everything will translate unless it has a solid form.
Eric has been super easy to work with and we've been able to make suggestions every step of the way.

Stage 3 - the rough layout is finished - at this point CRUSH has no fine facial details but all the main body parts have been roughed and assembled.
My partner in crime, Mark Thornton has started roughing out box designs.
Posted by Todd Kauffman at 4:28 PM 4 comments: 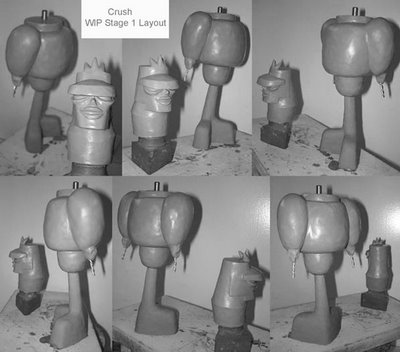 Jared and Garnet introduced me and Mark to master sculpter Eric Nocella Diaz. After seeing his work on their vinyl - BUZZ - we knew we'd found our guy.
CRUSH is one of the main characters in our concept series "Monstrocity High" and Neptoon Studios 1st vinyl "toy". I use the term toy lightly - we see it more as an interesting and fun way of building a potential audience and industry awareness - blah blah blah.
CRUSH will be unveiled Friday, July 28th, at the 'Live with Animals' Gallery (210 Kent Avenue, Brooklyn, NY 11211; entrance to the gallery on Metropolitan). Opening reception is from 6-9pm. The show, curated by Jared Deal.
The process has been really wild - fun to see our creation pop off the page. I'll be posting work in progress pics - so check back soon.
Posted by Todd Kauffman at 8:44 AM 3 comments: 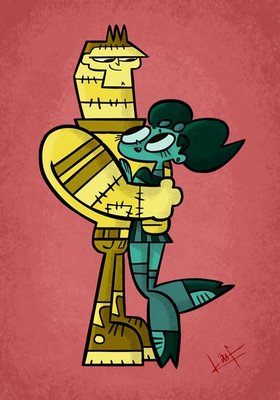 Here's one of the pieces I'm putting in for the SHADY CHARACTERS show that my buddyJared Deal is putting on at the Live With Animals gallery in NYC at the end of July.
Because most of my color work is created digitally, I've included the original ruff and the clean without color to go along side the finished art.
Also, Jared will be unveiling Neptoon's first vinyl - CRUSH - from our concept series Monstrocity High.
below originated at cartoon brew
"Shady Characters" is an art show that opens Friday, July 28th, at the 'Live with Animals' Gallery (210 Kent Avenue, Brooklyn, NY 11211; entrance to the gallery on Metropolitan). Opening reception is from 6-9pm. The show, curated by Jared Deal, is "simply a tribute to all of the creepers and tweakers, outcasts and outlaws, and freaks and geeks, we encounter daily." Participating artists include Deanna Marsigliese, Clio Chiang, Steve Lambe, Gabe Swarr, Rex Hackelberg, Anna Chambers, Mark Ackland, Todd Kauffman, Joel Trussell, Bobby Chiu, Martin Wittig, Aaron Augenblick, Phil Rynda, Peter Browngardt, Danny Kimanyen, Randy Ramos, Garnet Syberg-Olsen, Jamie Mason, Chris George, Eric Nocella, Dino Alberto, Jason Levesque, Tim Shankweiler, Eric Brown, Mark Pecoraro, Pat Pakula, Kevin Schmid, Kaori Hamura, Richard Mather, Rod Filbrandt, and Deal himself. Stay tuned to Jared's blog for additional details.
Posted by Todd Kauffman at 7:21 AM 11 comments: 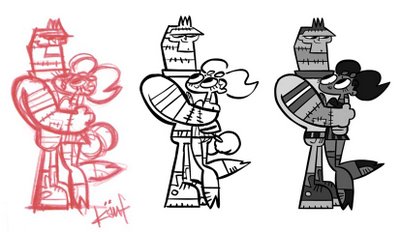 I like to do character thumbnails on the back of business cards - lets me focus on the overall shapes without getting wrapped up in all the details.
Posted by Todd Kauffman at 8:13 PM 4 comments:

Here's a very rough CG mock-up my friend Dean Outschoorn did for me...how creepy is this dude.

This is a repost - I had created a robot family and needed to round out my premise with some humans for them to interact with...I looked to Bruno Salamone for inspiration. His style is loose, fun and colorful and it was similar to the one I was working with already. I'm a big fan of Salamone's work. I could only hope one would look at these designs and see the influence.

Here are some rough thumbnail BG's for the show - I love throwing them in PS and playing with the hue. 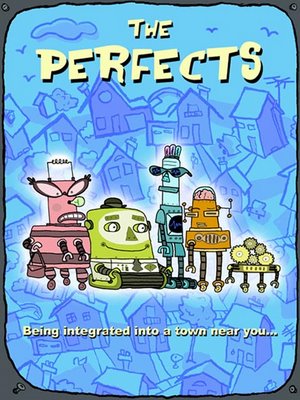 Here's the one sheet for the show concept that goes with the rejection letter a few posts down.
I still think it's a funny idea - they be trippin'.
Posted by Todd Kauffman at 3:56 PM 4 comments: